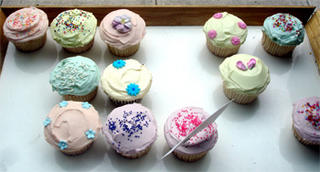 I've just discovered you can get cupcakes in London - the American version, not British fairy cakes - that means lots more icing. C this is your fault. Apparently, there are several bakeries, what a find! So who's up for testing them out? Melrose and Morgan, a grocer on 42 Gloucester Avenue, NW1, The Hummingbird Bakery, 133 Portobello Road W11 and Treacle, 160 Columbia Road, E2; 020 7729 5657. Saturday after yoga, I think so.
You are viewing a post on my old site. Click here to find this post on the new site.
10:49 PM |

Lost in Ikea again... I think the Brent cross branch has more than the Croydon one - sad hey. So, I've built four Billy bookcases (Anna you were right about the white-thank you) - fastest time 20 minutes... Now for the first time in huh hum years I have all my books out, wonderful.
Saw: Me and You and Everyone We Know - lovely film, thanks to L for suggesting it.
You are viewing a post on my old site. Click here to find this post on the new site.
10:32 PM |

Suffering from bad jet lag hence still being up at this late hour... Making use of the sleeplessness though, have just won my first auction on EBay - as if I haven't spent enough already…

So I spent most of the week sleeping, reacquainting myself with Radio 4, trying to work out how to reorganise my room, which included practically memorising the Ikea catalogue, bad food at Ikea - no offence Anna - getting lost numerous times walking around the showroom...argh...and to think I'm going back again next week. Haven't managed to get myself working yet, but live in hope. Got to see little R today though and am volunteering for Open House tomorrow…hope you are all out there checking front rooms.
You are viewing a post on my old site. Click here to find this post on the new site.
1:35 AM |

Takes some getting used to... Upside: nobody locks their doors; car doors, front doors you name it. The bus driver knew my stop the second time I took the bus and it was a couple of days between journeys. Out door showers...wonderful. The other day I stepped out of the shower and their watching me were two deer. Beaches are wonderful.

Downside: Very expensive food, restaurants, and shops - it's catering to rich holidaymakers from New York and around.

You are not allowed to take dogs on the beach during the day so I'm on the beach with my friend who has a dog, which she's reluctantly left at home. So this dog comes bounding along the beach followed by its owner. My friend asks about bringing a dog on the beach and the owner replies that as her family own part of the beach she thinks she's ok...but on the other hand my friend 'probably isn't'...

All in all though it was bliss - warm and sunny with lots of knitting...
You are viewing a post on my old site. Click here to find this post on the new site.
10:40 PM |

Well, no I didn't stay in the Galapagos, but have been rushing around from one place to another. Finally, I'm on Martha's Vineyard and can catch up. I've had an amazing time.

The Galapagos was wonderful - but don't go there at this time of year...very chopping.

I sunbathed next to an Iguana; saw Blue Footed Booby’s (birds with blue feet), Sea Lions, Tortoises and the highlight was a Penguin that swam underneath me when I was snorkeling.

We had some lovely people on our boat a mixture of Canadians, Australians, Americans and Brits. The boat however was pretty crap, I will now forever associate the smell of diesel with it which I used to like, but no more.

The islands really are pre-historic looking. Looking back at one of them from the boat I realized that that's why they appealed to me, to put everything else into perspective. Whatever has happened in the world the islands have not changed. Like everything that's not entirely true, humans have introduced different species onto the islands, which have altered the habitat and the animal population, but from a distance they look like nothing has ever touched them.
You are viewing a post on my old site. Click here to find this post on the new site.
7:27 PM |

All my words and photos are